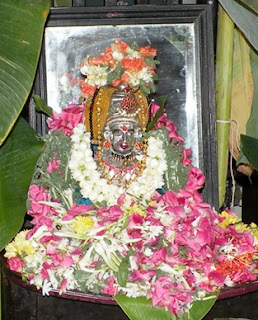 Varalakshmi is one who grants boons (Varam tharupaval). It is an important pooja performed by many women in the states of Andhra Pradesh, Karnataka,Tamilnadu and Maharashtra. This Hindu festival 'Vara Lakshmi Vrata' is celebrated on the Second Friday, before the full moon in the month of Śravaṇā, ( Tamil adi or avani month) which corresponds to the English months of July–August.
As the legend goes, this is a pooja that was pronounced by no other than Lord Parameshwara to be performed by Parvathi to seek prosperity and happiness for the family. Thus it came to be emulated by married women who sought boons (varam) for the health, wealth and knowledge for the entire family from Lakshmi,the Goddess of wealth.
The following is the story of Shyamabala who performed the pooja and brought prosperity to others.
Shyamabal was the daughter of King Bhadrasravas and his wife Surchandrika. Shyamabala got married to king Malatharan.
A few months later Goddess Lakshmi disguised as an old woman came to Surachandrika’s palace. She asked Surachandrika to advise her daughter Shyamabala to perform Varalakshmi pooja. But Surachandrika thinking that this old woman is nothing but a beggar, insulted her and chased her away.
Knowing this incident, daughter Shyamabala went to that woman and pacified her and apologized on behalf of her parents. She asked the old woman about the Varalakshmi pooja and she sincerely performed it. She was blessed with wealth and great prosperity. At the same time, her parents lost all their wealth and became paupers. Hearing this Shyamabala sent a vessel full of gold coins to them. But when they received the gold coins, they all turned into coal pieces attributing to their bad deed. Hearing this Shyamabala advised her mother to observe the Varalaksmi pooja. Her mother repented for her deeds and started to perform the pooja.  Blessed by Goddess Lakshmi she regained her wealth and prosperity.

How to perform the Pooja?
Note: In Tamil Nadu, it is customary that the newly married girls should formally take the pooja from her mother or mother in law. A new ‘amman’ face is gifted to her for performing the pooja. If it is not a custom in their home they should go to their friends’ or other relatives’ who have this pooja and tie the ‘saradu’ (sacred yellow thread) after participating in the pooja.

Woman of the house should clean their home, decorate the floor with ‘ma kolam’ ( rice flour). It is customary to build a small mantap decorated with tender banana plants, mango leaves, and flowers. A full banana leaf (‘ nuni ilai’) is to be placed in the mantap and paddy grain ( ‘nel’) or rice should be spread on the leaf. A small silver or copper vessel (‘sombu’ or ‘kudam’ ) should be placed. It is filled with rice.it shoul be decorated with sandal, kumkum ,flower garlands and a puja coconut ( a coconut with tuft) should be placed, tuft facing up. The amman face should gently tied to the coconut and the face should be decorated to your desire.