Kaar rice is ground  and  ‘adai’ is prepared as offering to God during the festival. Hence the name ‘Karadai Nombu’. As per the legend Savithri succeeded in bringing back her husband Satyavan’s life from the hands of Yama. This ritual is also known as Savitri Nonbu.

This festival is celebrated at the time of ending of the Tamil month of Maasi and beginning of Panguni . Karadaiyan Nonbu ritual is observed by all married women for the well being of their husband and that the couples should remain together always. Unmarried women also observe Karadaiyan Nonbu and pray to Goddess Shakti to get good husband. 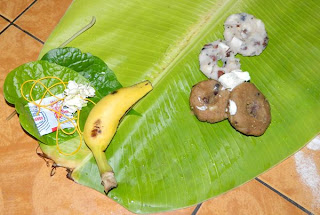 On the day of Karadaiyan Nonbu, women prepare a sweet 'adai' prepared with rice flour, jaggery and as well a salted variety of adai called 'uppu adai', both with a red colored cow peas known as karamani. After the Karadiyan Adai preparation, all female members in the family will get ready to start the puja. ‘Kolams’ (rangoli) are drawn in front of the pooja place for each female member of the family and banana leaves are placed on each kolam. If the count of the leaves are in odd numbers such as 1,3,5 add one to make that as even numbers such as 2,4,6,8.

The tip of the banana leaf should be pointing towards North. In the northern tip of the leaf ( nuni), betel leaves, betel nuts, banana, the ‘Nonbu Charadu’ or ‘Manjal Charadu’** (sacred yellow thread with a piece of flower tied in the middle)  are to be placed. The elder member should place an additional sacred yellow thread to be tied to the amman. Two sweet adais with little butter is placed in the middle of each of the leaves.  The puja starts and the neivedyam is offered to Goddess Kamakshi or Goddess Shakti. Ladies and girls should be in front of the leaves and after slowly sprinkling water circling around the leaves three times they should chant the mantra:

Following the tradition of Kaaradayan Nonbu every year is believed to bless the women and their husband with a long married life.


** If the 'charadu' is not available or provided to you by your sastrigal , you can prepare them by dipping a white cotton thread in turmeric paste. Knot a piece of flower or a flower petal in the middle and use this.