Pongal is one of the most popular festivals of South India, mainly Tamil Nadu. In the very earlier days this started as a harvest festival thanking the sun and welcoming the spring.
Pongal or Thai Pongal is also called Makara Sankaranthi, since it is celebrated on the first day of the Tamil month ‘Thai’,  when the Sun enters the Makara Rasi (Capricornus). This signals the onset of spring and the end of winter.
Pongal falls in the mid-January every year and marks the auspicious beginning of Uttarayan, the Sun's movement northward for a six month period. According to mythology it is said that in Devalogam six months are day and the next six months are night. In Hinduism, Uttarayana is considered auspicious.All important events are scheduled during this period.
The front of the home is decorated with kolam with ‘kavi’ ( red dye) borders. Traditionally it is best if the place for celebrating the pongal cooking is open to sun ( such as the front garden, back yard etc). Every member of the family gathers in the open space to cook the traditional Pongal.
In the earlier days, and even now in villages , a fire wood hearth will be set up using three bricks. The pongal cooking begins by putting a clay pot with water on the hearth. 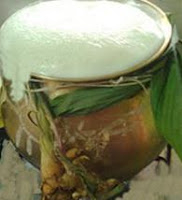 The clay pot is now a days substituted with metal vessels resembling the pot ( Vengala paanai) and cooked over the gas or the electric stove. The stove should be cleaned and decorated with kolam. The pot ( the vessel) should also be decorated with rice flour paste and kum kum, and sandal. Smartha families tie turmeric and tender ginger roots around the neck of the pot.
Traditionally the senior member of the family such as grandma, or mom conducts the cooking and the rest of the family watches the event. When the water has boiled she ceremoniously puts three handful of rice in first. The other ingredients jaggery or karkandu (sugar candy), milk , roasted green gram (payaru), raisins, roasted cashew nuts are added. ( For detailed recipe refer SweetPongal )


When the milk boils over the pot, the family members shout ‘pongalo, pongal’.  It is fun to watch.
Along with the sweet pongal,sugar canes, tender Ginger and turmeric rhizomes, betel leaves and nuts, banana are offered as neivetyam thanking the Sun God.
Traditionally the family cooks a feast consisting of venpongal, mochai sambhar with pumpkin pieces, sweet potato kari, curd pachadi and medhu vadai.
Vegetables such as sweet potato, ‘vaazhakai’(green plantain), mochai should be part of the food during ‘Sankranthi’.
Labels: Pongal